As Israeli forces deployed across the West Bank in hot pursuit of three teenagers who went missing on Thursday, the eyes of the Israeli public have been glued to screens across the country as they watched the drama unfold.Thousands of Israelis have taken to social media to support campaigns to demand that Palestinians #BringBackOurBoys. Following the lead of the prime minister, the Israeli public has placed blame on Hamas and the Palestinians more broadly, despite the fact that no group has yet claimed responsibility.The cries of the Israeli public for justice are now resounding throughout the English, Hebrew, and Arabic blogospheres.For Palestinians, however, the drama is not unfolding on television, but before their very eyes. And with more than 5,000 Palestinians currently sitting in Israeli prison cells, many view the Israeli campaign with deep skepticism.”What is three among thousands?” Ali Qaraqe, a Palestinian political satirist, asked during an interview at his Bethlehem shop. “A half-million Palestinians have entered occupation prisons (since 1967), and no one ever asked about them,” he continued.For Qaraqe, the disparities between how the media and Israeli public has reacted to the missing three teenagers — compared to the thousands of Palestinian prisoners, including more than 100 arrested in the last 24 hours — has made it hard to take the campaign seriously.”Don’t the prisoners also have poor families? It’s as if the Israelis are humans but we are from a different planet,” he said.Qaraqe highlighted the timing of the boys’ disappearance, which came on the 50th day of a hunger strike by more than 125 Palestinian prisoners who are being detained with charge or trial by Israeli authorities. The strike has been hardly covered by the Israeli media, and Qaraqe argued that many Palestinians have concluded that the only way prisoners get out of jail is through prisoner exchanges.”Israelis have to understand their responsibility in the occupation.” Qaraqe continued: “You are the occupiers, you are the ones arresting us and killing us every day. You have to deal with us, because for every action you take against us there will be a reaction.”Indeed, the brutal Israeli reprisals in recent days have highlighted the tenuous realities of life under occupation for millions of Palestinians. In addition to the 125 arrested in door-to-door overnight and daytime raids across the West Bank in the last 24 hours, overnight air strikes injured a woman and a girl in their homes in the southern Gaza Strip. 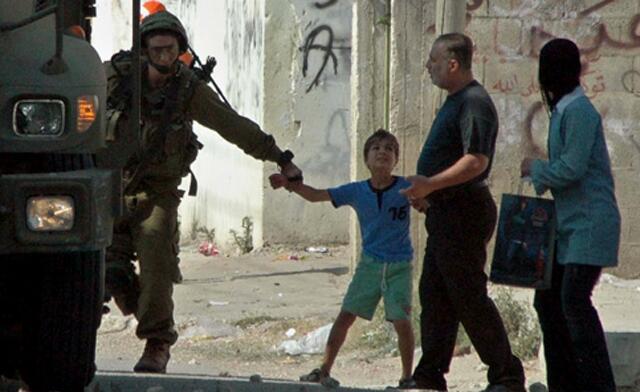 ‘Palestinians have been asking to ‘bring back our boys’ for years’Khaled Quzmar, a legal adviser at Defense for Children International-Palestine, argues that while many Palestinians sympathize with the suffering of the families of the missing boys, the double standards are staggering.”We support the right to life of all Israeli children, but not at the expense of Palestinian children,” he told Ma’an in a telephone interview.”1,400 Palestinian children have been killed by Israel since 2000, and more than 200 are currently in prison, suffering from all kinds of torture,” he added.Quzmar also stressed that Israel has endangered the lives of its own children by transferring them to zones under military occupation. More than 500,000 Jews live in Israeli settlements across the occupied West Bank, and the three boys went missing while trying to hitch hike in the Gush Etzion settlement west of Hebron, built atop lands confiscated from local Palestinians.”These children went missing in a settlement, which is internationally recognized as being illegal and in occupied lands. The responsibility lies with the Israeli government which brought these children to an illegal settlement built on occupied lands,” Quzmar argued.”There is no Palestinian who wants any person on earth to live the moments they have had to live through … But but every single family in Palestine has seen the violations of their children’s rights by the occupation,” he continued.”Palestinian families have been asking for many years to ‘bring back our boys!'”Quzmar told Ma’an that earlier on Sunday he had passed through Hebron, whose 600,000 inhabitants are currently under a tight military siege, en route to see his brother for the first time in 11 years. Quzmar’s brother, like 40 percent of Palestinian men, has been in Israeli prisons for a large portion of his life, and Sunday was the day of his release after more than a decade of incarceration.But passing through the checkpoints around Hebron, and the large concrete barriers erected to prevent Palestinian traffic, he lamented that the Israeli attacks were now renewing a cycle of violence that would only hurt more Palestinian civilians.”They are doing whatever they want to the Palestinians. Hebron is besieged, and everything is closed,” he told Ma’an. “Children and mothers have to go walking through the checkpoints, as cars are forbidden, and they stand there waiting for the soldiers to let them through.””What is the fault of the children at the checkpoints?”As the search for the three teenagers drags on with no end in sight, an entire population is being held hostage to the whims of the military as the Israeli public demands blood. For Palestinians, besieged for the last seven years in Gaza and now Hebron as well, there is a fear that the lockdown could potentially mean a renewal of violence and increased restrictions.Bethlehem-based satirist Qaraqe, however, is not fazed.”When these things happen, Israelis need to ask themselves: Why do they take our children? Because they love to take children? No, there’s a reason, and they need to realize it.””What is the point of peace if we do not have our rights and our prisoners are still in prison? This is not the kind of peace we want.”

Alex Shams is an Iranian-American writer and a PhD student of Anthropology at the University of Chicago.